Where did I meet you?To be honest, I’m not really sure how I came across Ben Akrins’ awesome PlottyBot project, but I’m sure glad I did! Maybe it was the post I saw on Toms Hardware or on Reddit. E... 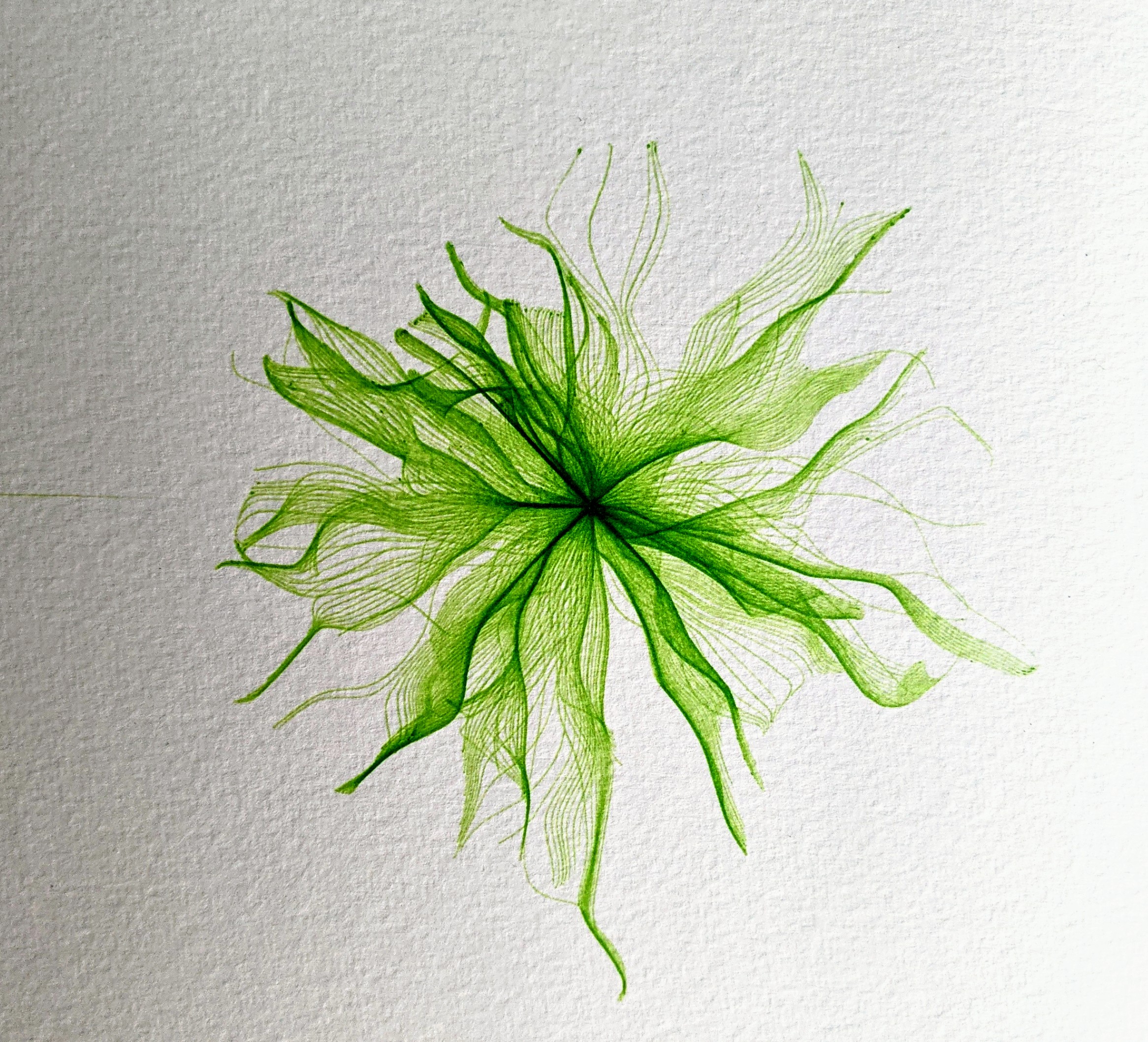 Where did I meet you?

To be honest, I’m not really sure how I came across Ben Akrins’ awesome PlottyBot project, but I’m sure glad I did! Maybe it was the post I saw on Toms Hardware or on Reddit. Either way, it got my attention and definitely struck a chord with me for a few reasons. It took me back to a time when I was in school (maybe junior high, maybe earlier) and just learning about some of the cool things you could do with computer assisted drawing - maybe it was the Turtle language - I can’t quite remember - it’s been a while since Junior High! Anyway there was something nostalgic about it for me.

To be honest, I needed a new project like I needed a new hole in my head. I’ve got a few younger children, I’ve got a few hobbies that already take up a bunch of my nearly non-existent free time, and I don’t have tons of space to put some new doodad that will leave my wife scratching her head (I’ve already got a reputation you see).

But we’re still in Covid lockdown, I can make some cool art for the kids and maybe spark some of their creativity and interest in building, plus it would be sooooo coool!

So, why take on this project?

The thing that really gave me the confidence to attempt this build was the depth and clarity of the build documentation that Ben put into his creation. It’s really detailed with tons of photos, great descriptions, and a Build of Materials with links to purchase on Amazon that gave me a good sense as to how to get started, and how much it was going to cost (~$275).

This is not just physical hardware design, it includes plotting software too! Ben has written some web based python tooling that translates Gcode into Turtle code. This code is used to to ‘talk’ to the stepper motors via the RaspberryPi GPIO interfaces… All of this is super important as it is the bit that actually makes the plotter do stuff!

If all that’s not enough, he’s made some cool software that can capture your actual handwriting and make the plotter spit it out in realtime, and another cool web program called Mandalgaba that makes geometries that the PlottyBot can draw in realtime too.

Here’s a quick video of my first plot using Mandalgaba as you draw on the web page, the plotter draws it on the paper - rad! When I let my kids go on this, they nearly lost their minds!

You can tell that this is the culmination of many many hours, months, probably years of effort from someone who is really interested in all of these things, and is also interested enough to quite generously take the time to publish his work to the internet so that maybe some other like minded, curious individuals may benefit.

(Sorry, I couldn’t help it) 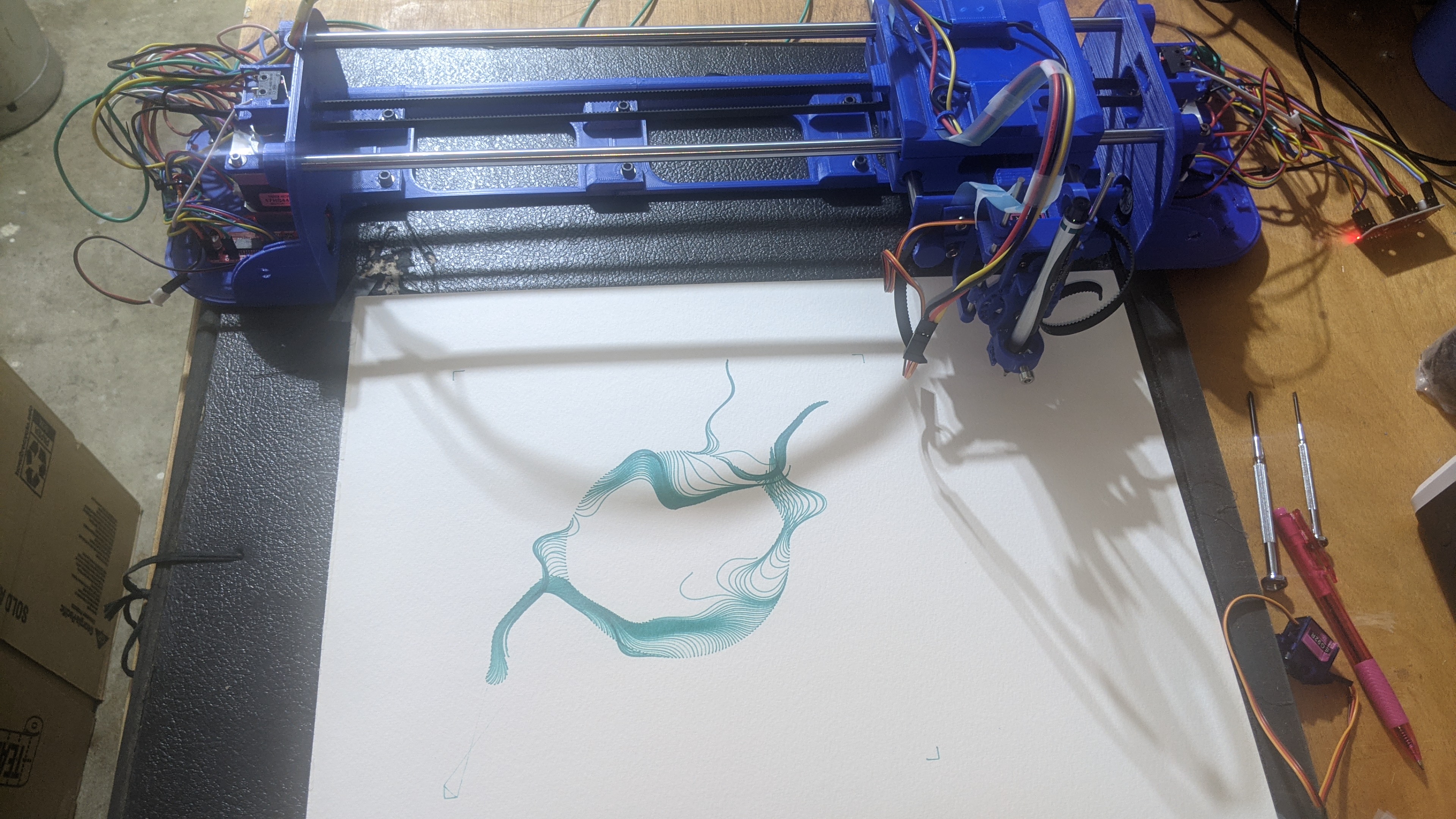 Instead of putting up a bunch of pictures of my build (Ben already did an awesome job of it), I thought I’d add some of my notes / reflections on challenges I faced along the way. Hopefully anyone else considering the build (or already in the thick of things) may find some clues to help them along the way.

If there are aspects of this project that are new or challenging to you, as they were for me, know that you will get over whatever hurdle you’re currently facing and will be the better for it!

Don’t give up! Sleep on it, google it, find a way to test it, but keep pushing on, success will be your reward! =)

I’ll break this section down into a few areas of focus for the project including 3D Printing, Electronics, and Software.

I greatly improved my 3D Printing knowledge/skills during this project, and I’m all the better for it. My Ender 5 Plus is better calibrated, I fixed some cooling issues with it, and dialed in my ABS printing profile. All good stuff!

All told, it took me about a week and 1Kg of filament to print out all of the parts - this includes reprinting and troubleshooting. I had many printing challenges which required tuning and testing of both the machine itself and slicer settings.

If you’re wondering about your machines print accuracy, I’d recommend starting with the ‘gondola’ parts - at least this is where I had the biggest challenges with tolerances. It’s where the 8mm linear rails and bearings come together, and it’s a really tight fit! My first prints didn’t work at all, even using a utility knife to pare back the print to accommodate the hardware. I ended up using some hammer mechanics, and split the parts along the walls. You’ll definitely need to get this component fitting together before you move on. In my opinion it’s the most challenging part with little wiggle room (Exact-o, drill, and hammer aside).

After my first failure, I didn’t want to go through another 10 hour print only for it not to work, so I decided to mock up a small box that was similar to dimensions in the gondola design where the linear bearings would go… I printed using dimensions measured in original CAD diagram, then adjusted measurements with a slight increase in tolerance until the bearing would fit snuggly, but without fear of braking the part.

Picture below shows box to the left with measurements as specified in original Sketchup design, and to the right with Horizontal Expansion set to -0.18 in Cura. 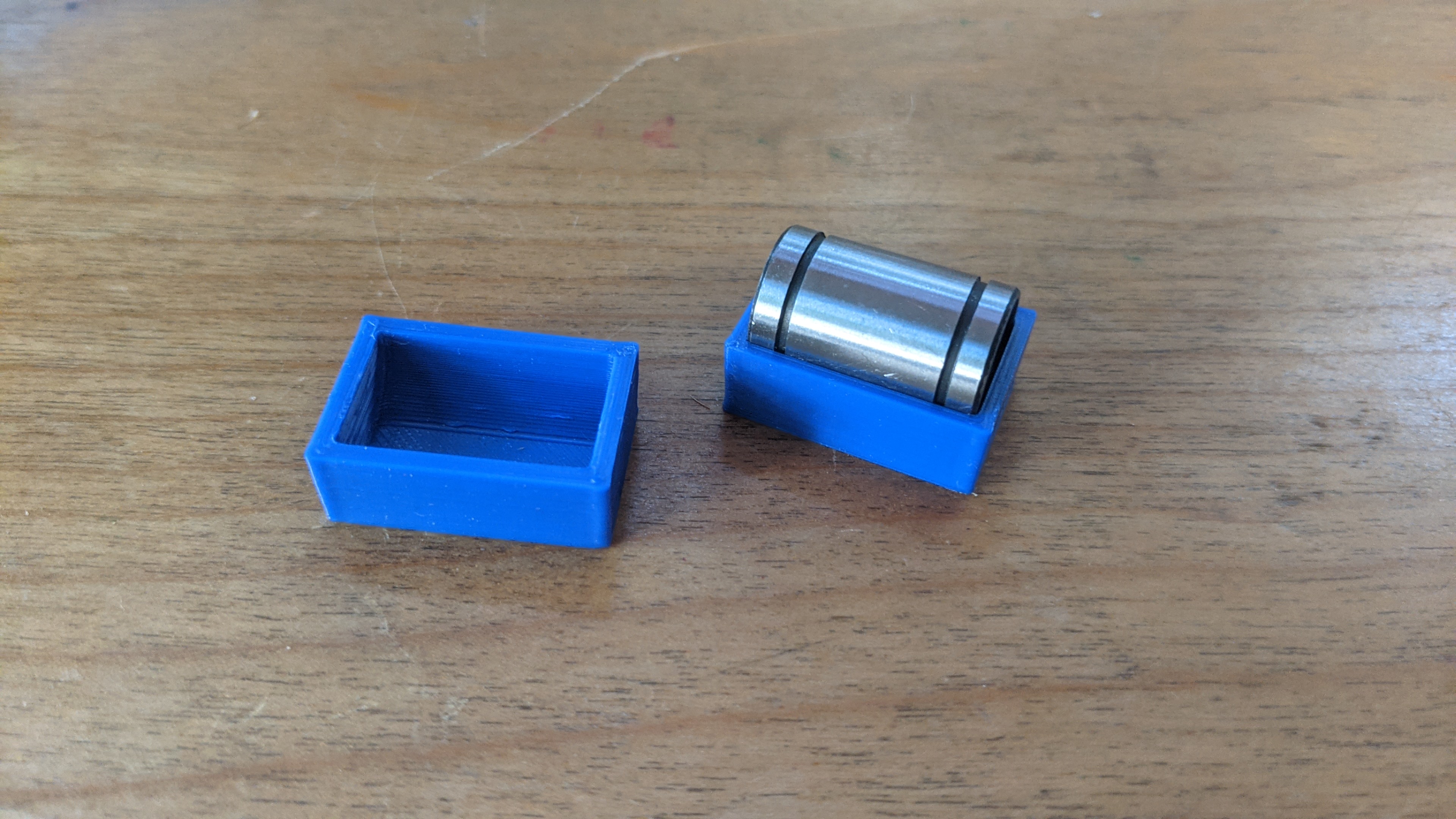 I used my final number to make slight adjustments to the ‘dimensional expansion’ settings in my slicer (Cura) to make the part just a bit bigger (.18mm), and it seems to fit the parts much better. The rail motion isn’t silky smooth, but so far isn’t causing problems. This is something I’d probably re-print to get it dialed in.

I also had similar problems with the small round ‘skateboard wheel’ style bearings. The pulley wheels they were supposed to fit in, split when using a hammer to tap them in. This one was a bit easier to simply redesign with slightly bigger tolerances for the bearing inserts (.15mm), and I was off to the races.

I learned how to make Dupont connectors - and some reasons why you may not want to use them! =) I also got somewhat better at soldering.

A few mistakes I made and their manifestations

Hopefully none of the above scare you away from pursuing this project… If you’re new to any of the above, it’s a great learning experience, and once you make it through, very rewarding.

Once you get a machine that can print Gcode - you’ll need ways to generate it. This is another art unto itself and depends largely on what you want to accomplish. I’ll share some of my generic workflows with you in another post.

For now know that I’ve been trying to do vector art in Inkscape or Adobe Illustrator - then translating that to GCode using a few different tools, parsing it so that PlottyBot knows how to translate it to Plotter Code, and have some fun! 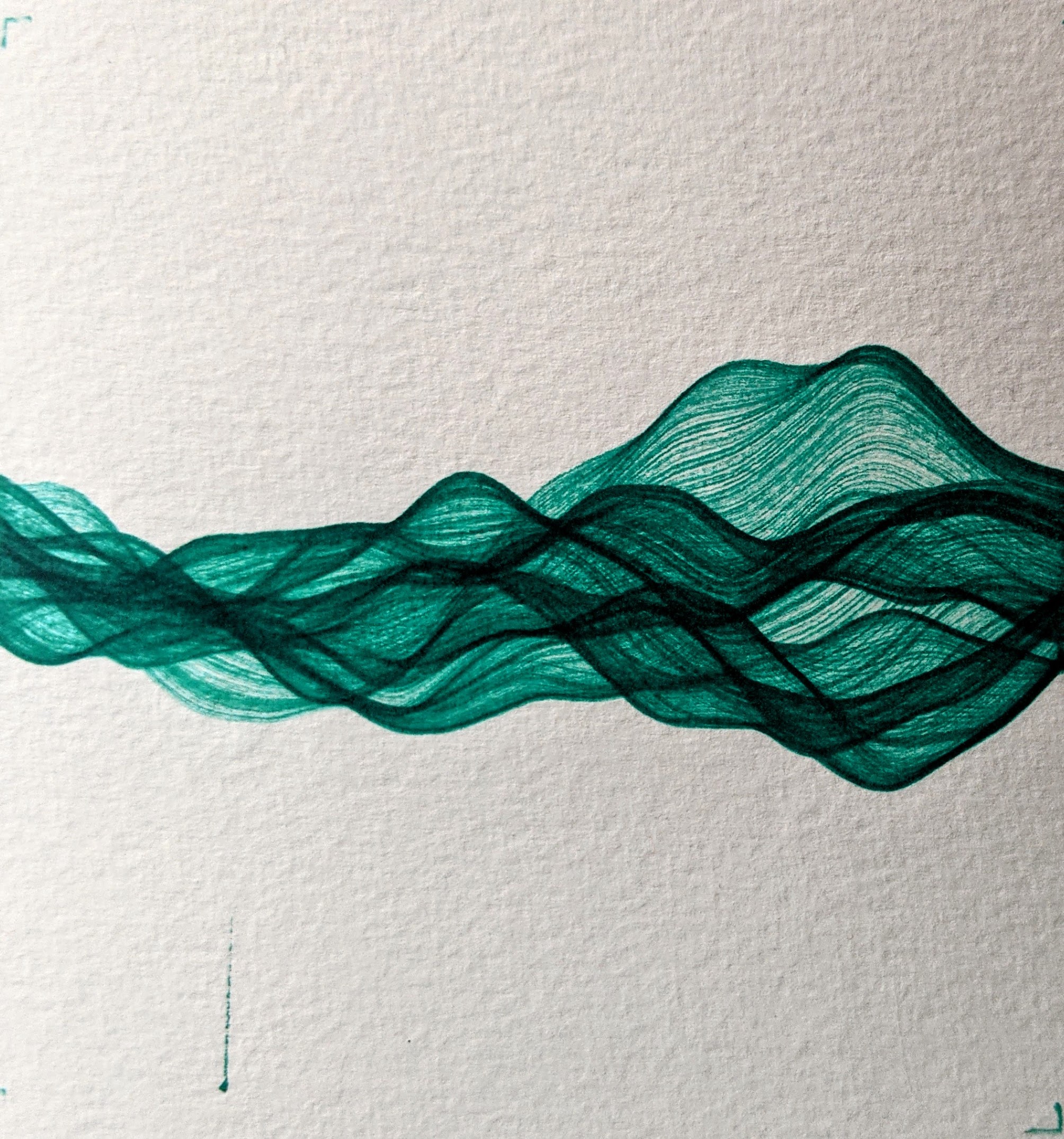